The My Skye Versatility Awards were introduced in October 2013 to recognise the fabulous achievements of our Skye terriers outside of the show ring. The awards scheme recognises achievements in dog sports, companion dog showing, Good Citizen’s awards, Pets As Therapy work, appearances in local and national press and pretty much anything else our Club members do that brings attention to this wonderful breed.

Jenny Kendrick and Pasha – Pasha completed his Platinum award this year by attending many meet the breed events, including Discover Dogs in London and at Crufts, attending Country Fairs, completing his Good Citizen’s Silver Award, gaining placements in Puppy Groups at breed exhibition and being the star of several news articles both online and in print. Congratulations on a very busy and productive year!

Cath Parker and Feebee – Feebee completed her Silver award this year by attending the Cheshire Game Fair in the meet the breeds section, gaining her stud book number with a RCC in breed exhibition, gaining 7 first places in breed classes at championship shows and winning Top Puppy with the Skye Terrier Club and Our Dogs. Congratulations to Feebee, who will no doubt soon be achieving her Gold and Platinum awards!

Jane Curtis and Barney – Barney completed his Platinum award this year by appearing at Discover Dogs, being a star of the local press in a magazine article and completing his Good Citizens’ Bronze Award. Barney is also a regular on the show circuit and adds Best in Show and Group placings to his awards. Congratulations on a busy and productive year!

Moira Barrass and Kelly – Kelly completed her Platinum award in style this year with accolades including TV appearances, primary school visits, a Champion title and attending the Skye Terrier’s Homecoming event on Skye.

Sarah Downes and Freedom – Freedom upgraded his Gold award to Platinum this year by working on the Discover Dogs breed booth at Crufts.

Hilda Stewart and Flossie – Flossie came through Skye rescue a few years ago and was found a loving forever home with Hilda. Since then Flossie has worked hard to overcome her shyness and achieved her bronze award with a Silver Good Citizen’s Award and winning classes at companion dog shows.

Linda Hasker and Poppy – Poppy is proving the Crufts commentators wrong by competing in agility and in 2013 she won into Grade 3. She competes in KC and UKA agility and has also attended the Skye Club Walk Across Skye to raise money for the Homecoming Statue. Poppy’s 2014 agility season started with a bang when she gained a 1st place in Grade 3 and she is now on Grade 4 – go Poppy and Linda!

Margaret Samuel and Jinty – achieving her Good Citizen’s Bronze award, her stud book number (along with Reserve CCs) in breed showing and taking part in the Skye Club’s Walk Across Skye to raise money for the Homecoming Statue, Jinty proves that you can have brains and beauty at the same time!

Josie Downes and Luna – at 10, Luna proves that senior citizens can do everything the young ‘uns can! She has visited Nottingham Trent University to take part in a grooming demonstration for the Animal Care HND students, has worked the breed booth at Discover Dogs in London and at Crufts, has achieved a Best of Sex award in breed showing and her Bronze Good Citizen’s award.

Sarah Downes and Freedom – Freedom joined Luna for the grooming demonstration at NTU, achieved a Best of Breed award in breed showing and has passed his Kennel Club Good Citizen’s Scheme Gold award.

Cath Parker and Brodie – Brodie has been working the press to his advantage with a starring role in an article in the Wellbeloved magazine and a regular slot on the breed booth at Discover Dogs. Brodie has also earned his stud book number in breed competition, has achieved his Show Certificate of Merit (ShCM) title, has taken part in the Walk Across Skye and has been a demonstration dog at the Skye Club organised Conformation and Movement talk. Phew – what a busy boy!

Hilda Stewart and Finlay – Finlay has been showing his sister Flossie how it’s done with his Good Citizen’s Silver award, a Best in Show at a companion dog show, a Best of Breed award in breed showing and several first place awards at Championship shows!

Thomas Hasker and Mop – Mop competes in agility alongside Poppy and has achieved numerous clear rounds and a dozen special awards. She has also visited Thomas’ school where he spoke about the breed to his class and she took part in the Walk Across Skye. Added to that, she has also attended several Young Kennel Club weekends with Thomas where the two of them have tried out heel work to music, grooming, handling and many other fun activities – way to go Thomas and Mop!

Margaret Samuel and Donald – as well as achieving his Championship title in breed showing, Donald is a qualified and practicing Pets As Therapy dog and can often be seen in his uniform. Donald also achieved his Good Citizen’s Gold award, regularly mans the breed booth at Discover Dogs London and Crufts and also took part in the Walk Across Skye!

A huge congratulations to all of our winners – don’t forget to keep a record of your activities during 2014 for next year’s awards! 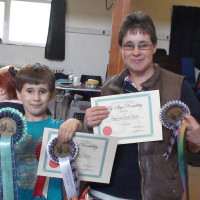 Thomas and Linda Hasker with their Platinum and Silver Versatility Awards

Luna and her Gold Versatility Award 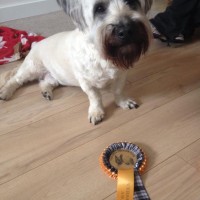 Freedom and his Gold Versatility Award