This is Elvis, he was rehomed in 2016 as his hormones had caused squabbles between him and the other dogs in his household. He was rehomed with a lovely couple who had experience of owning Skyes. John sends this photo of Elvis exploring his new garden and writes that he is settling in well. Good luck to Elvis in his new forever home, he certainly looks pleased! 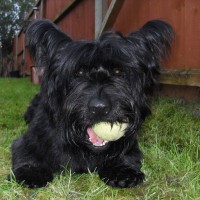 This is Whiskey, he was rescued way back in 2003.  He is nearly six now and absolutely loves life in St. Andrew’s, especially the beach.  Thank you to Jay & Nancy for the update and for giving Whiskey such a loving home.  It really is wonderful, keeping in touch and seeing how well our rescue dogs are doing.

This is a picture of Misty.  She looks just wonderful pictured at Bobby’s statue.  Misty was rescued back in 2006 and now lives with Heidi.

These are pictures of  Lily (Ethel), she was one of the original five rescued from down South last year.  She has a lovely home down in Weymouth and is much loved by Moira & Maggie, Moira writes

“She’s turning out to be a happy little character.  After a long time she realised she had a voice and started to bark and after many months, started to wag her tail which is really lovely.  We think she’s absolutely beautiful.  Thanks for the opportunity to give this dear little soul a home.”

Moira & Meggie, on behalf of Skye rescue, many, many thanks for having the love and patience to persevere with Lily and bring out her true character.

I cannot stress enough how important the people who take on our rescue dogs are.  Once again, many, many thanks to you all, not just from Skye rescue but all our rescued Skye’s.

These are pictures of Queenie, the latest Skye to be rescued.  She was found wandering the streets down south.  She was picked up by a local rescue centre and when she wasn’t claimed, we were asked to re home her.

She is now living with Helen & Julian and their German Sheperd, as you can see from the pictures, she has settled well.

Lucy now lives on the Isle of Skye and was also one of the dogs we rescued late last year.  As you can see from the pictures, Lucy is settling well, but, she does have her own unique story to tell.  Due to an unforseen accident, just after arriving on Skye, Lucy escaped from her new home and disappeared into the surrounding countryside.  Due to the life she had previously led, she was obviously very wary of people and managed to evade being caught for some time.  Eventually however, she was and now with love and attention she is gaining confidence.  John says of her ” Lucy is coming along well.  She is still aprehensive about leaving the safety of the garden but is quite at home chasing the odd rabbit and the neighbouring cat when they stray into her territory.  She is  a perfect little lady and gets on well with Aurora.”  As you can see from the photo, she also adores Lachie a Skye terrier puppy.

An Update on Lucy:

It is now over two years since Lucy came to stay here after her 5 week  sojourn in the wilds of Skye and she felt that it was time for an update.

Life has settled into a gentle routine most of the time since Aurora, whom she lives with, and John, who is their human, are both getting on a bit and  don’t like lots of wild exercise. This suits Lucy as she does not like moving far away from home. In practice a walk of about a kilometer is her limit. She then wants to go home again and when Lucy wants to do something then everyone has to comply.

Usually once a day Lachie comes along for a visit and then they both go out to the garden to romp about no matter what the weather. Ellie, a very elderly King Charles Cavalier Spaniel, is a regular visitor and is also welcomed although when she is here even Lucy has to take second place.

She is extremely territorial and objects very loudly to any infringement of what she perceives as her area. This includes anyone, or anything, moving within about 200 to 300 metres of the house.

She’s a bit picky about her food but weighs in at a steady 16Kg and knows exactly when mealtime is and when titbits are due.

Altogether she is a wonderful little terrier and has installed herself completely in the hearts of all who know her.

This is Teddy, he now lives with his best friend Eve, a cross collie. Teddy was one of the Skye’s rescued towards the end of last year, along with Flossie.  Looking at him now you would not believe that when he was rescued, he was barely able to walk due to his badly matted coat tying his front legs together!  Some of you may remember seeing him at the last Club Champ. show.

Teddy now lives with Jeff, this is Jeff’s second rescue as he had previously taken Ollie, also pictured on this page.

We have some wonderful people taking our rescue dogs and we cannot thank them enough.  Many, many thanks to Jeff and we look forward to more pictures.

Flossie was rescued from down south some weeks ago and was very shy and timid when we collected her from the RSPCA.  We were fortunate to find her a fabulous home with Hilda, now due to Hilda’s kindness and patience, Flossie is gaining confidence, slowly but surely and is even attending training classes, just this week she was able to show off with a sit and stay which she had been learning at home.  As you can see from the picture she has learnt to play and loves playing with the ball.

Below Flossie in action (sorry about the focus, but she is quick off the mark with the ball!) 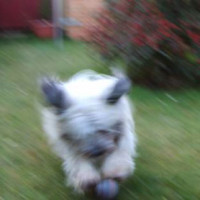 An update on Flossie from Hilda: “I thought that you, as one of those few people who know what Flossie was like at the beginning, would be interested to know that she passed her Silver KC Good Citizens Award this week.  Its a huge achievement for her, as she is still a very nervous wee thing, and I’m very proud of her.  Its about two year since she came, and shows how far she has come”.

You may remember Ollie from last year, he came into rescue because his owner had died.   Ollie was found a loving home with Jeff and Eve (a cross collie bitch).  Ollie hadn’t been well for a couple of days and after listening to veterinary advice, Jeff had to make the decision we all dread.

Ollie was only with Jeff for the last 11 months, but inspite of this Jeff has said that even had he known how little time they would have together, he would still have taken him.  He loved him from the start.  I had warned Jeff that Skye’s had a way of getting under your skin and Ollie certainly did that.  He was not easy to start with, but soon had Jeff wrapped around his paw!  Jeff and Eve miss him terribly. 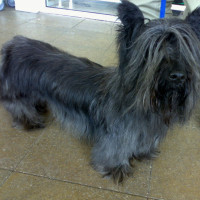 On behalf of the Skye Terrier rescue I would like to thank Jeff for taking Ollie and giving him such a loving home.  Thank you