It’s not just Skye owners in the UK that are showing the world what Skyes can do – Skye owners and enthusiasts compete in dog sports all around the globe! Here are some of the stars of the dog sports world making their mark.

Lola is 10 years old and has only recently begun competing in freestyle. She enjoys the bold rhythms of the music and recently scored a 7th place in Open Freestyle with her ‘Bull’s-Eye’ Routine.

Honey is nearly 5 and has been competing in freestyle since 2013. She trains with coach Svetlana Latyntseva and recently scored 5th place at the Championship of Russia qualifying show. Honey also volunteers for the charity Canistherapy in St. Petersburg, visiting children’s hospices and orphanages as a therapy dog. See Honey dance in this wonderful video!

Philip is eight years old and has been competing in freestyle since 2012. He also trains with coach Svetlana Latyntseva and has recently scored 2nd place at the Dancing with Dogs Qualifiying Competition in the Debut Freestyle class with his ‘Scottish Dance’ routine. Phil also works with the charity Canistherapy alongside Honey, visiting children to entertain them and teach them about Skye terriers.

Mellie Hanson and her Skye Terrier ‘Parker’ – Ch Marwyn Glitter in the Air – compete in Rally-obedience in the USA. A relatively new sport, Rally combines some of the traditional competitive obedience talents with agility and heel work moves. Competitors have a set time to finish a pre-designed course and they get marks for speed, accuracy and execution of the individual moves. Mellie explains that Parker is truly a remarkable little lady –

“My Skye girl Parker has two legs toward her RN (Rally Novice) title and we are going to get that title this spring. She is also ready to get her CD (Companion Dog title) and she earned her CH more than a year ago. In addition, she can catch a tennis ball in her mouth, pull laundry out of the washer or dryer, pick up objects that I drop, gets my cell phone when it rings, and more. She is wonderful!!”

“Parker is the third generation of Marwyn Skyes that earned performance titles. In my experience (27 years), Skyes can do everything you ask them to do — just keep everything positive and fun. My Skyes have also loved doing tracking, but I haven’t entered a real tracking trial yet.”

Elaine Donini Hersey and her Skye Terrier ‘Brian’ compete in Competative Obedience in the USA. Brian is the latest in a long line of obedience Skyes that Elaine has worked with and he has recently eared his second Open Obedience leg with a score of 188.5, securing him a 3rd place! Check out the Skye Terrier Club Facebook page for some wonderful videos of Brian in competition. 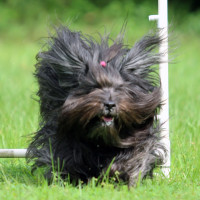 In late may of 2006, Darlene Sumner got a call from her local animal shelter saying they had one of her Skye terriers. Darlene was a little confused by this, as all her dogs were sat in front of her at the time but here’s what happened next…

“I really didn’t believe they had a Skye knowing the rarity of the breed. But, low and behold they did. I adopted her and waited for someone to claim her soon. So began our relationship. She didn’t trust anyone and was very leery of human contact. I was training another one of my dogs and she would watch. So I gave it try. She loved the attention as long as I didn’t touch her. Thank goodness with time she learned she was safe and had found her forever home.

A dear friend of mine told me about AKC Invitational, so I started checking into how many Skye Terriers there were showing in agility. I couldn’t find any on any of their reports. So, if we could just get 1 MACH point we were going to be invited. Well, we did!

And Sabrina has earned at least 11 different titles over the years and this year will be her 5th AKC Invitational. She has maintained her reign of the #1 Skye Terrier in Agility for 5 years.

She will be 13 when she runs her last time at AKC Invitational. It will be her retirement run. Bless this little dog, she has given so much for a dog that was a stray that no one claimed. And I am so thankful no one did.”

Darlene has had such fun training and competing with Sabrina that she recently took on young trainee, Norman.

“Norman is the new kid on the block. He is just 2 as of this past August. He is a natural at agility and has earned his very first “Q”, qualifying score, as of June 2015. We are having a ball figuring each other out. He has other ideas on how to run the course. But, I know eventually we get our act together. After all, Sabrina taught me “It’s all about the Journey”.”

Watch Sabrina run at the AKC Invitational Agility Competition – she is the first Skye ever to be invited!