You may have heard the commentators at Crufts 2014 make a faux pas concerning Skyes, claiming “you probably won’t see them doing agility”. How wrong they were! Linda and Thomas Hasker and their Skyes Poppy, Mop and newcomer Toffee have been competing in agility for a number of years.

Poppy, who has been recently retired, qualified for Grade 4 in agility during her career. Toffee has now taken over the competition mantle, starting out in Grade 3 with Linda. Thomas Hasker, one of few junior Skye handlers and even fewer junior agility handlers, has trained and competed with Mop, achieving several clear rounds and judges specials. He now enjoys handling Poppy in any-size competition. Thomas also handles Toffee in breed competition, qualifying for Crufts 2015 and 2016. Here is a video of Thomas and Poppy at the Welsh Kennel Club in 2015.

Of the reaction people have to seeing her Skyes in competition, Linda says:

When I first took them to training, which was about a year ago, my trainer said they wouldn’t amount to much but in our first year of competeing they have achieved many clears a few 4ths and even a couple of seconds. So the trainer has had to eat her words several times!!!!!!

Every time I go to a show I get asked ‘what are they?’ and ‘they can’t possibly do agility’. Well they can and they love it, and to promote the breed furthur they are impeccably well behaved and they talk to everyone” 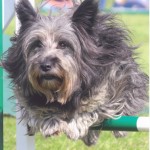 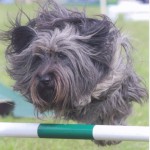 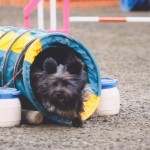 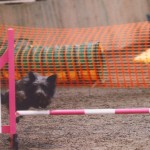